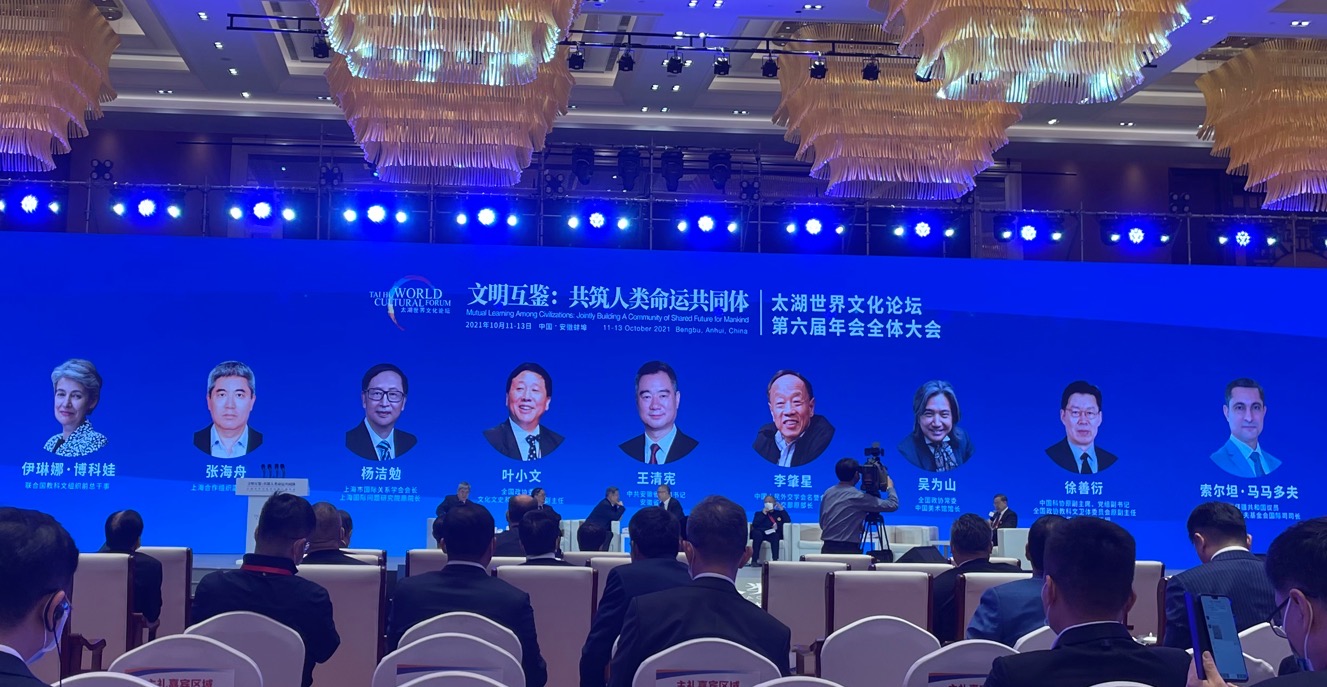 The current world is undergoing a dichotomy of development. On the one hand, the tangible and intangible bindings of international community become increasingly intertwined, thus not only making the world an earth village, but also an integrated entity. On the other hand, there are also forces pulling the world apart and making the international community fragmented and in piecemeal. Moreover, arising are some worrying social thoughts such as unilateralism, protectionism, extremism and Xenophobia. These phenomena are also teaching us that physical power is far from enough to combat the current and future challenges to the mankind. Indeed, to meet these challenges we need to synchronize both physical and cultural strength.

Many nations compare mankind's development course as great rivers surging ahead. Although there are such backwashes and countercurrents as geopolitical and ideological competitions, the mainstream flows are always powered by cultural strength and the longing for peace and properity. As a scholar on international relations, I would like to share with you some of my perspectives on the cultural factor in the construction or destruction of a community of share future for the mankind.

First of all, cultures and civilizations mainly come from the relevant economic and physical basis. In the long years of human past history, the insufficiency of material goods gave birth to various cultures reflecting the struggle between dreaming for fair distribution and grapping for physical wealth. Obviously, to realize the goal of both increasing the material wealth and enhancing the spirits of fair distribution, the mankind needs to build a new global culture that could promote greater material production and enhance more fairness of distribution. Among many countries to strive for this end, China stands out prominently. Thanks to the 40 plus years of reform and opening up, China has now succeeded in eliminating perennial poverty and entered in a new stage of aiming for common prosperity for everyone. As a matter of fact, this is a part of the global efforts embodied in the UN Millennium Goals and 2030 Agenda for Sustainable Development. The latter emphasizes more on integrated developments in economies, environments and social aspects.

Furthermore, cultures enjoy both individual features and collective richness. Every and each culture of the world has its own traditions and distinctiveness. Therefore no single culture can claim itself are superior than the other. Instead, all cultures should live together and learn from each other. Beside, with the development of the times, the mankind is increasingly closer to the stage of making a new global culture that draws nutrition from the past, represents the present and directs toward the future. In my humble opinion, some of the main elements could already be found in the concept of a community with a shared future for mankind to build an open, inclusive, clean, and beautiful world that enjoys lasting peace, universal security, and common prosperity.

Likewise, the world's new realities and conditions are calling for new political and security cultures. There are emerging new outlooks on peace and war. For instance, the Fourth Summit of the Conference on Interaction and Confidence-Building Measures in Asia (CICA) in May 2014 advocated a new concept of common, comprehensive, cooperative and sustainable security. The African Union (AU) is also trying hard to balance the normative order and actual behavior so as to build up a new security culture that meets the challenges of the 21st century.

It goes without saying that there is no royal road and short cut towards a global culture in the new context and to guide us to a more glorious course. Therefore, it is extremely important that the entire international community should turn their current efforts in cultural aspects into building blocks of the framework of pluralistic yet harmonious culture of the future world. Indeed, the new global culture in the entire mankind's interests will long survive the election-driven political and security concepts. If only for this, we should plunge ourselves into this great course and promote for a community of shared future for the mankind.